The traditional Yurok language area is along the Klamath River, from its mouth at Requa to Weitchpec about 40 miles upstream, and south along the Pacific coast from Requa to Trinidad. In pre-colonial times there may have been about 2,500 speakers (Kroeber 1925). In the 21st century, while the Yurok Tribe is the largest in California, there are fewer than a dozen first-language speakers of the language (Golla 2011). However, tribal members and language activists have been pursuing language revitalization and reclamation (Yurok Language Project). 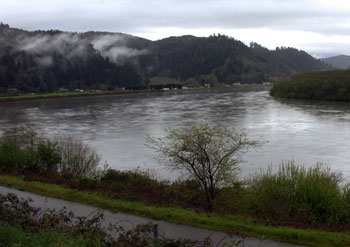 Yurok belongs to the Algic language family, which also includes Wiyot, spoken immediately to the south, as well as all the Algonquian languages (Cree, Ojibwe, and many others), which are spoken across central and eastern Canada and the northern United State from the Rocky Mountains to the Atlantic coast.

The Yurok language is well known among linguists for several unusual features. One is phonological: Yurok is among a very few languages of the world to have the rhotic vowel sound /ɚ/ among its phonemes (another such language is American English). In addition, Yurok has a rhotic vowel harmony process by which underlying non-high vowels /a/, /e/, and /o/ may become /ɚ/ in a word that has /ɚ/; for example, the root /nahks-/ ‘three’ becomes [nɚhks-] in the word [nɚhksɚʔɚjɬ] ‘three (animals or birds)’. This same word also highlights a second well-known feature of Yurok: its elaborate numeral system. Numerals inflect according to the class of what is counted, with the many classes including humans, animals or birds, boats, houses, bushy things, flat things, round things, and so on. As many as two dozen numeral classes are known.

In its word structure, Yurok is not unlike other Algic languages. Verbs are morphologically complex, assembled from a root, potentially several derivational suffixes, and inflectional endings that show agreement with the grammatical subject (and sometimes also the object). For example, /meʔwometʃokʔ/ ‘I come from’ contains a root /meʔwom-/ ‘from’, a suffix /-etʃ-/ ‘come, go’, and an inflectional ending expressing first-person singular agreement; the related verb /neskwetʃokʔ/ ‘I arrive’ shows a different root, /neskw-/ ‘near’. Verbs also express iterative aspect through an infix /-eɣ-/ and repetitive aspect through reduplication. In contrast to verbs, which are morphologically elaborate, nouns inflect only for locative case and in a very few cases for plural number (most nouns do not distinguish number).

Yurok sentences are notable for extensive use of preverbs: a class of short non-inflected words that usually precede the verb, expressing grammatical categories such as tense and aspect; direction, location, and associated motion; negation; and circumstance, intensity, and modality. The order of other words in the sentence is flexible, with pragmatics playing a crucial role in determining whether nouns precede or follow the verb.

Audio sample: From the story of the toad and the mouse (spoken by Florence Shaughnessy)