The traditional language area of Wailaki / Eel River Dene, a group of closely related dialects, is along the Eel and Van Duzen rivers in present-day Mendocino, Trinity, and Humboldt counties. As far as is known, there are no first-language speakers of any Eel River dialect remaining in the 21st century (Golla 2011), but in pre-contact times there were as many as 10,000 speakers of several distinct varieties (Baumhoff 1958). Nongatl was spoken in the territory around the Van Duzen River, from its outlet on the Eel River to its headwaters near Dinsmore, and along Yager and Larabee creeks. A northern dialect of Sinkyone was spoken along the lower Eel River near Scotia to a few miles above the mouth of the Eel River’s South Fork, and along the South Fork down to present-day Miranda. A southern Sinkyone dialect was spoken on the South Fork of the Eel between Phillipsville and Leggett, and west to Shelter Cove on the coast. Lassik was spoken on the lower reaches of Dobbyn Creek and south along the Eel River to Kekawaka Creek, with a large settlement at present-day Alderpoint, as well as at the headwaters of the North Fork Eel and Mad rivers. Wailaki was spoken in the territory around the Eel River south of Kekawaka Creek and along the North Fork of the Eel River (Elsasser 1978, Golla 2011). Tribal members and language activists have been pursuing language revitalization and reclamation 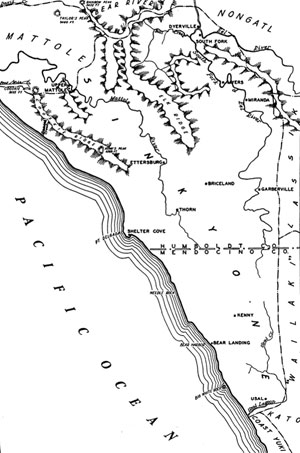