Languages related to the other Chumashan languages (Barbareño, Samala (Ineseño), Island Chumash, Obispeño, Purisimeño, and Ventureño) were spoken further inland, though little or nothing is known about them. Cuyama was spoken along the Cuyama and Sisquoc Rivers and to the north in the San Joaquin Valley. Emigdiano — which is attested solely in placenames — was spoken at San Emigdio near Buena Vista Lake. This latter language has been shown to be a variety of Barbareño, influenced by Buena Vista Yokuts (Beeler and Klar 1977). While difficult to estimate, there were perhaps over 1,000 speakers of Cumaya and several hundred of Emigdiano (Grant 1978). 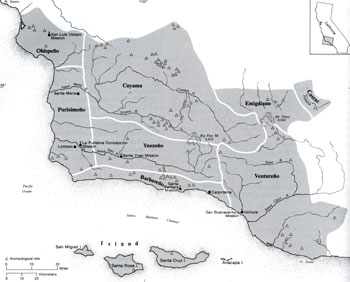