The traditional Hupa language area is along the lower Trinity River in Humboldt County, from the lower South Fork to the canyon at the north end of Hoopa Valley. Chilula and Whilkut, considered dialects of Hupa, were spoken by people living along Redwood Creek to the west of Hoopa Valley. In pre-contact times, there were an estimated 1,000 speakers of Hupa and around 1,000 speakers of Chilula and Whilkut combined (Wallace 1978). In the 21st century, there are fewer than a half-dozen first-language speakers of Hupa remaining. The Hoopa Valley Tribe has supported language revitalization efforts since the 1970s, and many people have developed a degree of second-language proficiency (Golla 2011). 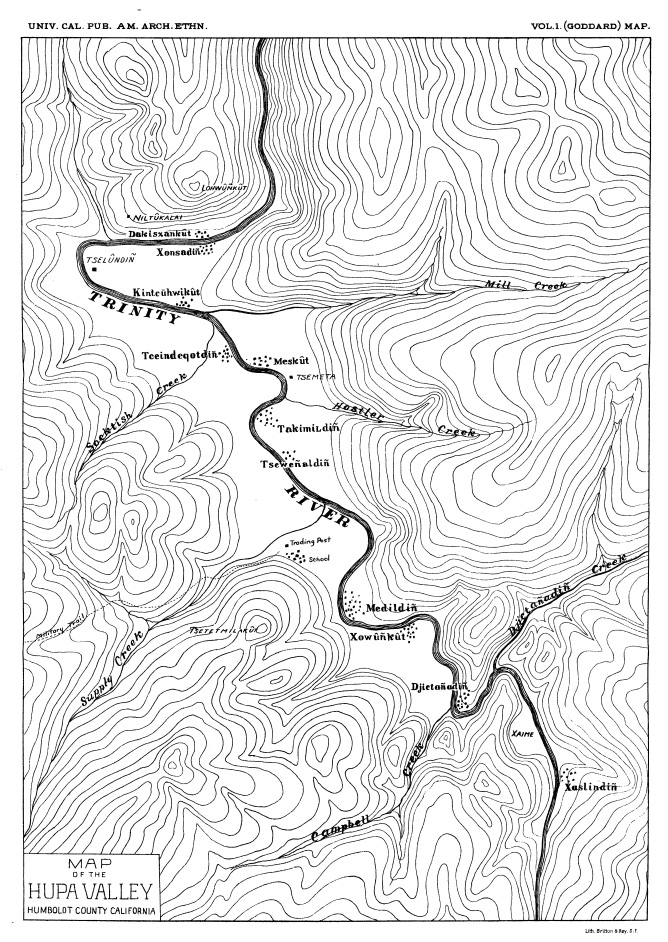 Map of Hupa Valley by Pliny Earle Goddard. 1903. Life and culture of the Hupa. *University of California Publications in American Archaeology and Ethnography* 1:1-87.

Dene languages are well known for their elaborate verb morphology. Hupa is no exception: each verb consists of a stem preceded by a potentially large number of prefixes that participate in complex morphophonemic interactions. Subject agreement is split between two positions: first and second person subjects are marked close to the stem, while third person subject prefixes occur farther away, e.g. niwhkya:w ‘I’m big’ versus ch’iningkya:w ‘he’s big’. Derivational and inflectional morphemes are interleaved throughout the verbal template, leading to discontinuous lexical entries known as “themes” among Dene scholars. For example, the verb theme translated in English as ‘stir’ or ‘move something back and forth’ consists of a stem -na and a prefix xi-; this theme is inflected with aspect and agreement prefixes to make full words like xe’iwhna’ ‘I move it back and forth’. Moreover, Hupa verb stems change form depending on semantic properties of their arguments such as number, shape and texture. For example, the stem -łiq’ is used in the word ya’winłiq’ ‘he picked up a dough-like object’, whereas the stem -kyo:s is used in the word ya’wiłkyo:s ‘he picked up a cloth-like object’. Most Dene languages have fairly rigid word order, requiring noun phrases to come before the verb. Hupa is exceptional in this respect: it allows noun phrases to appear to the right of the verb. Noun phrases are sometimes divided between preverbal and postverbal positions, as in the following example:

Audio sample: Verdena Parker tells a story about her cat