The Survey of California and Other Indian Languages has over 150 linear feet of archival material, mostly paper records, comprising over 2000 separate catalog records. We hold primary source material on some 130 languages, mainly spoken in the western United States, including at least 50 of the indigenous languages of California. Especially well-represented language groups include Algic, Athabaskan, Chumashan, Hokan (for example Karuk, Pomoan, and Shastan), Penutian (for example Maiduan, Miwok-Ohlone, and Wintun), Uto-Aztecan, and Yukian. All of the languages documented in our collection are severely endangered if they have any remaining native speakers.

Housed in a secure, climate-controlled space, the material in our archive consists primarily of field notebooks recording linguistic elicitation, indigenous language texts, and word lists. The collection also contains secondary material derived from these field notebooks, such as file slips, dictionaries and edited texts. Much of our manuscript material has never appeared in publications, though some of it has provided the primary data for published analyses.

In addition to familiar genres such as notes, file slips, and manuscripts, our collection contains many “survey sheets” on which students collected basic lexical and grammatical information from a consultant. These sheets often provide information about unique consultants or dialects, or provide a record of research that was undertaken outside a scholars eventual specialization. We also archive notes from a few Berkeley field methods classes on American Indian languages (over several decades), photocopies or microfilm of fieldnotes that are housed in other (sometimes inaccessible) archives, copies of manuscripts (in many cases the only surviving copies), and a very small number of plant and animal specimens.

Our office in 1311 Dwinelle Hall has space for browsing archival materials, as well as computers for accessing the online catalog. To complement the largely unpublished primary and secondary materials in our collection, we also maintain a small, non-lending library of published resources, including dissertations, journals, books, and bibliographies, on languages of California and the Americas. These published materials can be searched using the linguistics department’s online library catalog and are available for on-site use by visitors to the Survey.

The S. A. Barrett Collection contains 41 files of field notebooks, manuscripts and index cards documenting at least 11 different languages and dating from 1902 through 1908. The collection includes a large amount of material on Pomoan languages and is invaluable for the comparative and historical study of this language family.

The Abraham M. Halpern Collection contains dozens of field notebooks as well as file slips and other secondary notes on various Pomoan languages, spanning a date range of 1937-1984. Halpern’s collection provides a unique resource for Pomoan studies because of the long time span of his field work.

The Robert Louis Oswalt Collection contains 69 boxes of material relating to Pomoan and other languages (e.g. Aleut and Yuki). This includes field notebooks with vocabulary and elicited sentences in five Pomoan languages, longer texts in Kashaya and Southern Pomo, oral histories collected from the linguist Abraham Halpern and from several Pomo elders and language consultants, and numerous unpublished manuscripts.

The Gladys Reichard Collection contains photocopies of Reichard’s Wiyot field notebooks from 1922 (the originals are in the Bancroft Library on campus) as well as her original file slips (in three shoeboxes) for a never-completed dictionary project. These file slips represent probably the single most important unpublished resource on Wiyot, a language with no remaining native speakers.

The Jesse Sawyer Collection contains field notebooks, file slips and manuscripts documenting Wappo, dating from 1956 to the 1980s. Sawyer’s collection is rare in that it contains biographical information about consultants, allowing for accurate identification of the geographic and temporal location of the variety of Wappo documented.

The Mary Woodward Collection contains transcriptions of 28 Hupa texts recorded in 1953, and 29 notepads of secondary lexical slips based on the same texts. Woodward’s work resulted in the first substantial Hupa text collection after the early twentieth-century work of Pliny Earle Goddard and Edward Sapir. 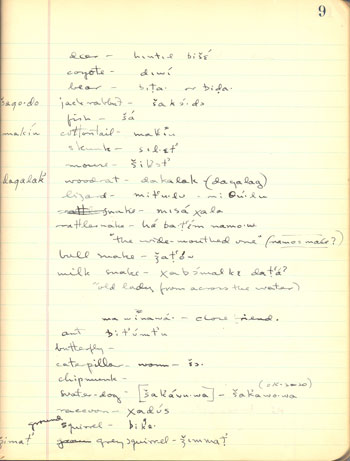 A page from one of Abraham Halpern's field notebooks (Halpern.009.003)
